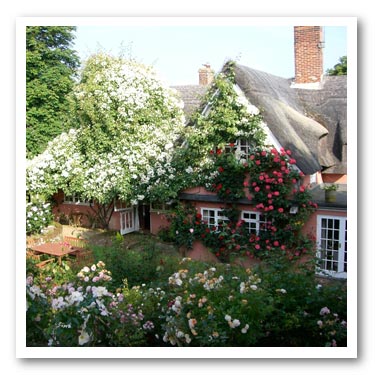 The Barrandov opera is possibly Britain's smallest and most intimate opera house, the fulfilment of an opera lover's dream inspired by the cultural tradition of Prague.

The Barrandov opera is set in glorious Suffolk countryside near Needham Market in a magnificent barn restored by Carol and John Dearlove on the 200 acre family arable farm. They had often held private opera evenings in the old barn and in the garden. These were inspired by the music they enjoyed while living and working in Prague just after the Velvet Revolution. Carol sadly died early in 2008 but was able to see the project come to fruition and flourish.

The idea for the Barrandov Opera was born out of a disastrous fire which completely destroyed the old barn in November 1998. Opera at the Dearlove's farm had usually been held in the garden and was inevitably subject to the vagaries of the weather. It seemed only logical therefore when it came to rebuilding to put the opera inside and leave the straw out in the open - perhaps the ultimate diversification in farming. The building itself was reconstructed by a team of young local craftsmen led by master carpenter Rick Lewis using traditional methods. Some seventy tons of oak were used for the frame. There is a barn owl nesting box.

The Barrandov Opera opened its first season in 2003 with two opera productions 'The Marriage of Figaro' and 'Così fan tutte'. There have since been some ten productions including Holst's 'The Wandering Scholar', Lennox Berkeley's 'The Dinner Engagement' and the Stravinsky classic 'The Rake's Progress'. There has also been a regular programme of Opera Gala Evenings and chamber music recitals featuring the St. Petersburg Quartet and the Czech Wihan Quartet.

The Barrandov takes its name from the high bluff overlooking the river Vltava just as it enters the city of Prague. The Barrandov district of Prague is best known for the Barrandov film studios, but it has also been home to various members of the Dearlove family over the years. The Barrandov Opera has received support and encouragement from the Czech National Opera in Prague, the Lobkowicz family at Nelahozeves Castle who have been great supporters of music over the generations as well as from Vaclav Havel, late President of the Czech Republic who was Patron of the Barrandov until his untimely death in 2011.

In addition to the regular programme of musical events, the Barrandov is also available on a private basis for weddings, receptions and seminars. There is a fully licensed bar.